OK, so that definitely won’t be the title of the poem. I’ve been watching a lot of The Last Kingdom recently, the Netflix (originally BBC) adaptation of the Bernard Cornwell books set in Saxon England during the Viking invasions. The show’s a little shlocky, a little silly, but also one of the most visually arresting things on television: it’s all wintry landscapes and frozen streams and hardscrabble villages with thatched rooves struggling to stand against the cold. It’s a version of the country I’ve never seen before and – as the onscreen captions shimmer between the old and the modern versions of each placename – I’m struck by the idea that everywhere must have looked something like this once, even our biggest, sleekest cities.

For a while I’ve wanted to write something about Beorma, the supposed 7th century Anglo-Saxon founder of Birmingham. The main impediment is that no one knows anything about him, though this very extensive website, from which I’ve borrowed gratefully, has had a good try at assembling a kind of grounded legend from the historical context. Probably what most interested me in any case is that sense of foundation: driving a stake into the hard ground and building something from nothing. Looking out from my absurdly epic floor-to-ceiling windows up here, I can see everything that the city has become, but as a result those origins – and how hard, how contingent and fragile they must have been – are somewhat occluded.

What I found in trying to revisit this foundational moment was the impulse to turn away from it – to focus instead of everything that grew up out of it, rather than those lean days themselves. Looking over the result, I wonder if the poem in its latter half tries to do too much – whether the form, which is somewhat gimmicky, is the best way to tell this story which, like the end of the new year’s piece I put up yesterday, is really about holding on.

I’d be interested to hear your thoughts, and if you want more Anglo-Saxons having a miserable time I might take another look at this later in the week. I also wondered if the turn in the middle is a bit too overloaded, leaning too hard on the simplicity of those abstract terms. There’s a discipline to the form which helps me make hard choices about what can and can’t be in here, something I always find useful, and I am weighing up some kind of resolution about FOMO in any case, not only writerly. It also looks, I realised, a bit like the old library, and some of you might get a kick out of that. I also couldn’t conclude without referencing Gregory Leadbetter’s Beorma poem in the Birmingham anthology I co-edited for VERVE 2017, This Is Not Your Final Form, and also this tweet which informs the end of the first half.

Hi all! For the first week of 2019, I’ve been lucky enough to be offered a week’s residency in an apartment in the Rotunda courtesy of Staying Cool and their programme supporting artists, Creative Heights. During this week on the 18th floor, lasting from today till the 9th, I’m going to aim to do two things: write something every day that’s at least marginally city-themed, and share whatever ragged drafts they emerge in as I go. The poems I post this week will be only lightly edited, possibly a little raw, but I hope the pieces and the accompanying notes will give a bit of an idea of my process and what interests me about this brief.

By the time I checked in today and got myself settled, it was dark outside, and I wanted to write something that captured my first visual impressions of the city at night, but also something about the peculiar emotional state of this time of year – the sense of things beginning as well as ending, and the different ways that might be processed across the exterior and interior landscapes. For my money, though it was necessary to get some of it onto the page, I think there might be a bit too much personal reference in what otherwise aims to be quite a public poem, and I might think about trimming that in future drafts. It’s almost definitely too long overall in any case, and the stanza breaks are currently fairly haphazard. There were a couple more emphatic ‘ever’s and ‘never’s which I edited out, and some lines which I knew I’d become too obsessive about fitting into my usual regular rhythm, which I tried to allow to be a bit more themselves when I went back over them.

Two other sticking points: that line about light and blessing has gone through three or so different versions and still to me seems a bit grandiose, which increasingly I try to watch out for when writing something that’s meant to be grounded in the ordinary world: I like the new year’s blessing as a theme through the poem though, and wanted to find different ways to vary it, and perhaps to transition out of the more personal moment something with a bigger sweep is useful. I also wonder about the samphire gatherers, who might be a bit of a precious inclusion – there’s a line in King Lear about looking down from a cliff on people carrying out this ‘dreadful trade’, and though the description turns out to be imaginary it’s always struck me as poignant and memorable. But I was thinking about the St Kilda fulmars from a podcast I was listening to earlier today, and thought these extremely isolated rural figures might still offer a useful contrast to this urban one.

John Donne (again) has a beautiful poem called ‘A Nocturnal Upon St Lucy’s Day‘ which I wanted the title of this dark, wintry, rueful piece to echo. I hope the last line here is earnt by the caveats and admissions that go before and by the mundanity of the comparison it aims for, but see what you think.

Happy new year to the Premier Inn,
to the grimy dark side of the Odeon,
to the boys on scooters crossing the overpass
and over even that, happy new year
to the sleeping-giant station roof, puffed up
like bubble-wrap; wan lemon rows
of empty multi-storey parking bays,

joyless Meccano. And to the red dots
on cranes and towers, to the yellow hoops
of obsolete crowd-control checkpoints,
the thin green band rounding the ankle
of Corporation Street, layered like traffic lights,
may there be comfort in this further change.

Trains heave themselves like January joggers,
working up to the brink of something,
straining beyond. I glimpse the sign
for Han Dynasty, and, if I squint,
something that might be Rod Roj, curving round
into a memory, and wish them — well,

as well as I can manage. I’ve been told
the sounds up here are peaceful, but I don’t
find peace in opening the windows:
too much space, too much air down
towards the functional, sinister rooves
of buildings whose names nobody learns.

Perhaps it’s the angle, but I can’t see
a single church spire, mosque or temple
through the beaded light, or where we used to live —
but light itself is still enough to bless
the bending tracks, the stark trees,
shuttered-up potato van, the awnings
I’d have never known were there.

The people pass like samphire gatherers, or —
I think of the men of St. Kilda, dangling
from tarry ropes to gather fulmar’s eggs;
the catchy, wistful song they sang in the exhibition.
And time passes, too, no less belligerent
for being slow, no louder than it needs to be.

A happy new year, then, to this privileged view
of the loading bay, the van reversing in,
glad to have found what must, in that moment, be
the brightest light around. Congratulations to
the diamond paving slabs I’ve never seen
who’ve made it all this way
without a fuss; let’s have the best one yet.

My role as Birmingham Poet Laureate technically started on October 4th, I think at around 6pm when the appointment was announced, but with the flurry of a new job at The Shakespeare Institute I found it hard to know how to make the best of it in the immediate aftermath. It’s a scary prospect, writing to in some way represent a city or its people, so I decided rather than waiting for a commission the easiest thing would be just to just get going and write a first poem under the Laureate banner – like the first pancake, it’s never going to be the best in the pile, but at least it’ll help the pan warm up. What the pan is in this case depends on your politics. 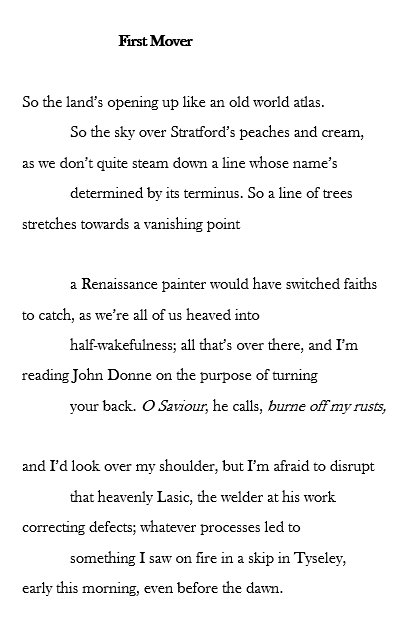 I know that I’m going to be spending a lot of the next few months on trains shuttling back and forth between the Jewellery Quarter, where I live, and Stratford-upon-Avon, and this Monday I had a curious sense that I was already turning my back on Birmingham. Part of what intrigues me about the city, though, is how this place with such a resolutely grimy reputation is poised right in the middle of what British people seem to agree is some of our most beautiful countryside. Heading out into Warwickshire or Worcestershire, the end of urban landscape and the start of rolling fields always feels to me like quite a sheer drop, and I like that contrast, the feeling that my work at the moment pulls me in two directions between the built-up and the bucolic – not least because I grew up in a small village in Lincolnshire.

Drafting this poem on my early train in I tried to make sense of some of the unease I was feeling at figuring all this out for the first time. I wanted to write something which ended with the sense of being pulled back, but without that becoming sentimental or unearned – to me, it would feel somewhat insulting to the spirit of the city to patronise rather than focus on what really makes it interesting. The reference point that occurred to me was a poem I’d read during my undergrad by John Donne called Good Friday, 1613. Riding Westward.  The syntax is a bit knotty, but the gist is that Donne feels kind of guilty for having to travel on business in a direction which takes him further away from the Holy Land, on a day when he thinks he should be remembering Christ’s crucifixion. But he manages to turn this into a positive: God, like the Sun, is too powerful to look at directly anyway, and the speaker asks to have his ‘rust’ of sin scourged or burnt away until he’s decent enough to be recognisable to his Creator.

That doesn’t have a lot to do with how I feel about Birmingham! But I liked the image of the rust coming into contact with this industrial city, and I really had seen something mysteriously on fire in a skip in Tyseley at about 7 in the morning. I thought the contrast of old and new – between Donne and my work, and between Birmingham and the ‘old world’ of Stratford – was a good way in to some of the ideas that interest me about this new chapter, and I tried to pick up on that by moving the metaphors from natural to industrial in the final stanza. The title comes from Donne’s poem, too – it’s referring to God’s role in the Creation myth, but I thought it would make for a good sly reference to a city that has always been primarily concerned with getting things moving.