I realised recently that, as this is the first real Birmingham-themed poem I wrote, I’ve found myself reading it at basically all the events I’ve been involved with in the course of my Laureateship so far. It’s a sort of historical love story with a twist, inspired by the tour I went on a few years ago now at the Museum of the Jewellery Quarter. For some reason, although audiences are often very kind about it, no one has seemed particularly interested in publishing it, so I figured I might as well share it here! The only word in there that may be confusing is ‘lemmel’ (I’ve also seen it spelt ‘lemel’) – a term from the jewellery trade meaning scrap gold, sweepings left on the warehouse floor. 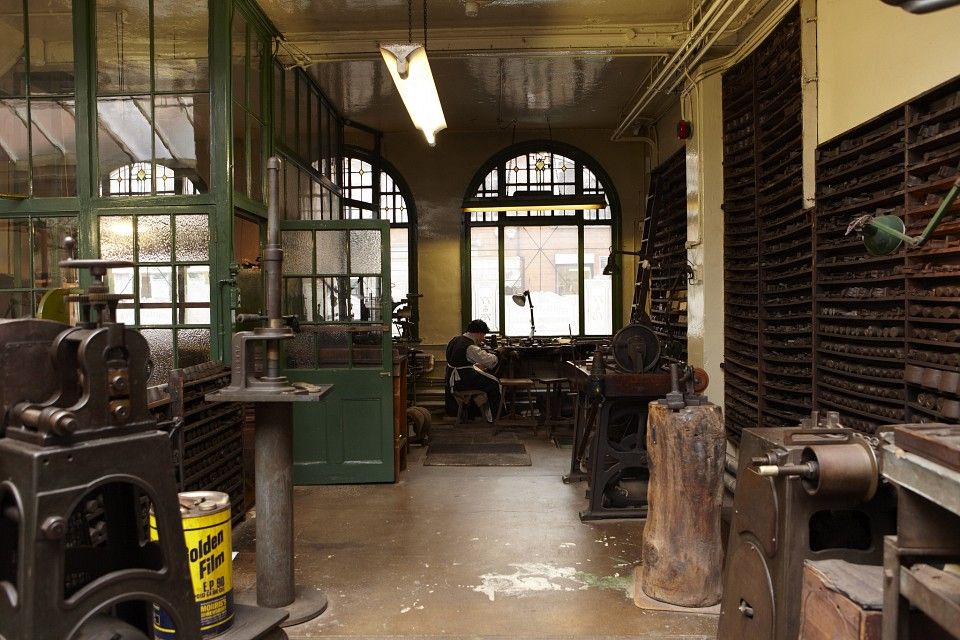 May the good god of shiny things
look fair on Harry Martin, seventeen,
his turn-ups turned away by Mr. Smith
who’d clocked the danger glinting in their folds.
What shame, to say he lived for dust;
that tucked, like pens, behind his Brylcreemed peak,
were egg-shell specks of fourteen-carat gold,
his hair a nest of loot;

which might explain his hopeful gleam
all hours beneath the howling radio,
the screaming belts, the thud of blanking dies,
and even his composure at the shriek
when Patty caught a kiss-curl in the belt —
shearing her free, returning to his peg,
her scalp less ruby-red, more Tamworth ham.

For which of us has not been tempted by
that old wives’ tale of hard-earned alchemy:
a jeweller’s apron, shaken, melted down,
yielding the gold to buy a wedding suit?
And who would not wish to be lemmel?
To see the shorn-off shavings of the years
reformed into an ingot, solid, pure —
a lifetime’s precious salvage totalled up,
made more than worth its weight in what we’d lost.

These are the blessings sent to Harry Martin,
clutching his off-cut prize down Branston Street,
not knowing that his lungs, at seventeen,
have started to collect their own fine spray;
the rust-red treasury of jeweller’s rouge
he smuggles out beneath his clothes the day
he cashes in, swaps packets at the pub,
ducks in a neighbour’s shop and buys two rings.

Over the last couple of days I’ve been talking a bit about the pitfalls of only looking from above – the loss of detail and scale. Today I went for a run (I’ve been doing the NHS Couch to 5K plan, which as well as an important personal challenge is a really interesting way to navigate and discover the city) along the canal from Fazeley Street in Digbeth to… well, I was originally planning to run fifteen minutes from there and fifteen minutes back. But after a while it was unusually sunny, and the changing landscape was pretty, and I had almost no idea where I was, so I just decided to keep going, through what I think was Small Heath, past the Ackers, and eventually emerged in Tyseley to catch the train back.

This is a photo from the station -my skills leave a lot to be desired, but you can just about make out the towers of the city centre in the distance. I like knowing I can get this far, metaphorically and literally (a phrase it’s no longer possible to use unironically in the wake of the Ghostbusters remake), and as I ran the poem taking shape in my head became to some extent about that increasing distance and the emotional resonance that came with it. I’ve always been attracted to the way you can see the city in a different way from the canals – the backs of things you can’t quite identify, and the scrappy greenery  hidden behind the brick and concrete at street level.

Today I thought it might be interesting to share the poem as a handwritten draft. It doesn’t look particularly messy, which isn’t intended to be a humblebrag – I tend to do a lot of the actual writing, the arranging of words, in my head before putting them on paper. Writing on a screen probably involves more rewriting for me, because the replacement of things that don’t work is so much easier and the evidence of failure is erased – a perfectionist tendency which I know sometimes stops me putting anything down on paper at all. But here it is in written form, half-assed attempts at italics and all. If you enjoy it, the route it describes is definitely worth exploring at whatever pace, though you’ll see that it’s conveyed out of order – not quite in a rear-view mirror, but approaching and retreating from the central subject. Probably easiest to just walk it in the normal order…

Not much to say about this one other than it’s a cluttered poem for a cluttered topic – as with yesterday’s, I was thinking a lot about what to bring into the work and what to leave out, and the pressure of that synthesis, again widening out from the personal to the civic. A couple of references are to plaques and signs in the city centre, and some of the reflection on change in the city over the centuries is broader, perhaps a little too broad. This feels to me like quite a ragged piece, but working out how to trim it down is perhaps something I can only do once I’ve got it all on paper and considered what’s actually important and not, the point being that this is a point about not quite knowing that in the first instance. I’m also experimenting with a blend between mundane frames of references and more conventionally poetic reach, and don’t feel certain the balance is right. Feel free to let me know what you think!

Today I’m taking a bit of a step back and reflecting on the weird position I’m in up here, with this grand view of the city and as Laureate more generally. I feel a pressure which I’m sure is mostly only self-imposed to say something, to summarise things, to offer a holistic view, and that’s very much encouraged by the feeling of standing at the windows of this crazy opulent suite and knowing just how much there is out there to write about. I’m conscious over the week of not having dug deep into any individual stories, of having repeatedly found myself taking some kind of long-view on events, and I wanted to send that up a bit in this poem.

I also wanted to write something formal, since I hadn’t so far – a sonnet inspired by one of my favourite city poems, Wordsworth’s lines ‘Composed Upon Westminster Bridge’, but to give that a kind of ironic modern twist through the tropes of space opera. I’m not satisfied that I’ve got enough of them in, though – I would like to find a way particularly in the last six lines of bringing in more specific references from that field. For me the ‘facade’ line isn’t quite working, so that might be the place to look at first: I wanted more of a sense of the flickering consoles and gaudy uniforms, to send up the conceit a bit more. The eight line feels quite cluttered to me, but I did want there to be a certain density and a grand-ness appropriate to the voice, so if it’s a little silly I might be able to get away with it in character. Or not!

Without wanting to get too much into ‘the people look like ants from here’ territory, I was struck by seeing the Specsavers sign on New Street from the window and thinking about the sheer variety of human activity that must be going on down there. In the two days left, I want to try to write more on the level of the eye-test rather than the widescreen panorama. But I’d welcome your suggestions for any particular Birmingham-based story you’d like me to think about for that.

Like some flash captain on a viewing deck,
I’m meant to make the sights I see cohere:
bring distant order to the chaos here,
rebuke young corporals who interject —
lecture on these Gold cranes that spear above
satellite dishes, mossy cooling ducts;
long roads that whip away, as if they sucked
clean into ergonomics ruined love —
The second officer sees it first: I can’t
support myself and also this façade.
The jigsaw won’t line up the way I want:
a signal box, an ambulance, chain bars,
opticians’ instruments… The lieutenant
hands me a cool drink, shepherds me inside.

Without a specific brief set for myself today I decided to go for an afternoon walk around some familiar haunts. I had a vague idea in my mind about matching places I could see from the window to the five stages of grief, but in practice I got a lot more interested in what I could see at ground level; in trying to be a camera. In the end I still went for five numbered stanzas, and I think it might be possible to work through some kind of mental matching, but I’m going to look at these again in a couple of days and see if they might be better ordered for the stages to come through.

I was thinking of bringing in a little more of the process, drawing on a more conversational tone (‘I was thinking of writing about…’) but as it became more observational it felt to me like that wouldn’t fit with the sparseness of the piece, though some of that comes into the third section. This kind of observational mode reminded me of the Westernised, probably fairly distorted, version of the haiku, and though I wasn’t aiming to write haiku, I did find myself wanting to pare back the stanzas I had to something that looked similar on the page.

Each stanza – except the last, where they didn’t seem to be anything more to add – was five lines and I cut it down to three. This meant losing a couple of images that interested me – in the second stanza, ‘a row of sad blue flags tipped / further forward than they ought to be’ and in the third, a reference to a preacher’s stand I saw which asked in plain text ‘Will suffering end?’, but I think the draft is better for being more thinned out. On the other hand, perhaps it’s too sparse now. And I don’t know about ‘a vector pulled / towards an anchor’ – is there too much difference between those two things, and so a clash of metaphors, or would something more boaty just make it feel a bit more trite? As ever, it’d be interesting to hear your thoughts on the density, the ordering, and anything else.

Here, by the way, is a picture taken by Pete Horrox of me in the residency apartment, if you’re wondering what the view is like!

Not Everything Is Visible From Here

The bridge on Holliday Street —
dim iron flowers and scalloping,
soft rust — majestic as an aqueduct.

Somehow it’s still open, that hotel
with the fluted front, like someone kicked
the doors in on a concrete safe.

All the apps tell you to create spaciousness
in the mind, but you’re a vector pulled
towards an anchor every time.

They’ve packed away The Golden Boys
for cleaning; everything is scaffolding
for something coming.